The Planned Obsolescence of Tech

Big Tech companies have a bag full of tricks to get you to buy their products. Eye-catching designs. Sleek marketing campaigns. Targeted advertising. Political lobbying. Big Tech gets craftier and more powerful by the day.

How about deliberately designing their products in such a way that ensures you remain a repeat customer for life? It might sound like a conspiracy theory, but Planned Obsolescence is alive and well, and you have almost certainly fallen victim to it.

Planned obsolescence: What is it?

Chances are you’ve heard of this concept before, but few understand the tremendous impact it has on the world around us.

Planned obsolescence is the method of designing consumer products to fail in a defined amount of time rather than last as long as possible. Need an immediate example? The smartphone you are likely reading this article on will only see approximately 2-3 years of use, and it’s not because the phone itself will reach the end of its natural life in that time.

Tech companies use four main techniques to ensure their consumer devices will be cast aside for newer models:

Let’s stick with the smartphone example as we go through each of these Planned Obsolescence methods.

Your smartphone contains a Lithium-ion battery that will falter after 300-500 charge cycles. If you carry an iPhone, that battery is glued in place and protected by proprietary Pentalobe screws, making it difficult and expensive to replace it. After two years, many new phone models will have been released, and it will be hard to justify paying for a costly battery replacement when you can put that money toward a newer phone.

Expensive battery replacement is only one annoyance that can arise when trying to keep a phone going past that 2 or 3-year mark.

If your device breaks or malfunctions, you’ll likely have trouble finding any manufacturer-sanctioned repair guides online.

Repairs covered under warranty often take weeks or months to complete. You may try to avoid the manufacturer and seek out an independent repair person or (gasp!) try to repair it yourself. Just know, if you do, you will likely be hit with language from the manufacturer that you voided your warranty, though it is actually illegal to void a warranty because of repair in the United States.

What if you break your smartphone screen, or there is an individual component within the device that needs repair or replacement and is not covered under the manufacturer warranty? Be prepared to pay a high premium on repairs through the manufacturer.

The choice offered to you is clear: either pay high costs to have the manufacturer repair the device or buy a new one. Any personal agency demonstrated outside of these two options leaves you on your own.

Suppose the repair cost versus the price of a new phone didn’t do the trick, and you’re still considering repair over replacement. In that case, the sad reality is that manufacturers will likely only support your device with software updates for a short time.

Android device manufacturers like Google are terrible about this; they stop supporting software updates of android smartphones after 2-3 years. So, as the battery slows down, the phone also becomes vulnerable to hacks and software malfunctions. The device becomes technologically obsolete. This is hardly an incentive to put more money into a flailing device.

These new releases are accompanied by flashy marketing and ad campaigns. You begin to ask yourself, “Am I missing out by not upgrading?” Before you know it, you’re trading in your perfectly good smartphone for the manufacturer’s “Best Phone Ever,” and your fear of missing out is momentarily satiated… until next time.

The cultural obsolescence piece is Big Tech’s most cunning ally. This tactic revolves around your personal choice, never mind the extreme psychological manipulation involved, and it goes way beyond our smartphones.

Planned Obsolescence is present in almost everything you consume, from smartphones to laptops, kitchen appliances, cars, farm equipment, and more.

The Planned Obsolescence of Tech

Why Are Companies Doing This?

When you discard your device or equipment before the end of its natural life and buy a new one, you bolster that company’s profit margin. When billions of people do it every year, those companies become the largest and wealthiest publicly-traded companies on the planet.

In 2018, Apple released their new wireless AirPod headphones while simultaneously removing the headphone jack from the iPhone. This forced many consumers to purchase the new AirPods and discard their old headphones.

It is estimated that Apple accounted for almost 50% of the global market share for bluetooth headphones in 2020. Apple’s Wearables accessory line reportedly generates more revenue than 60% of Fortune 500 companies. As a result, their total market value in 2020 toppled 2 trillion dollars.

With few regulations in place to prevent these practices, the consumer remains at the mercy of the manufacturer.

Worse, the environmental impacts of the e-waste created by this throwaway culture are staggering.

In 2019, we generated 53.6 million metric tons of e-waste globally, which is a 21% increase in e-waste production in the past five years. Only 17 percent of that waste was recycled- the rest went to landfills.

Electronic devices require large amounts of raw materials, carbon emissions, and toxic elements to produce. It took fewer raw materials to make a full-sized dishwasher than it did to manufacture one iPhone 6. The manufacturing process to create one smart device emits 40-80 kg of carbon dioxide into the atmosphere. When we throw away devices rather than utilizing them as long as possible or recycling them, we further deplete the planet of rare-earth elements used to create them. This not only creates waste, it means more of these elements have to be mined from the earth. One troubling example is the mineral cobalt.

Cobalt is used to make Lithium-Ion batteries for our phones, computers, and electric cars,  and the near-constant demand for this element has caused a mining boom in the Democratic Republic of Congo. It is estimated that over half of the world’s supply of cobalt is mined in the DRC, and many of those miners are children. UNICEF estimated that 40,000 children were employed in the DRC cobalt mines in 2012 alone. Working in dangerous conditions for little pay, many children have been injured, maimed, and killed by tunnels collapsing and work accidents.

In 2019, Congolese families brought a lawsuit in the US against Apple, Google, Microsoft, Dell, and Tesla, accusing them of “knowingly benefiting from and aiding and abetting the cruel and brutal use of young children in Democratic Republic of Congo (‘DRC’) to mine cobalt.” 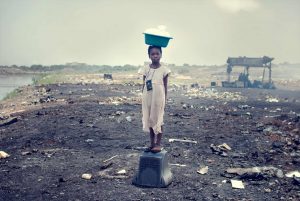 Adjoa, nine, sells small water bags to the workers. They drink it and use it to extinguish fires.

The Largest e-Waste Dump in Picture – The Guardian

The origin of Planned Obsolescence can be traced back to the early 20th century with the Phoebus Cartel and General Motors’ introduction of the model year. However, where it comes from is far less important than what we will do about it now that we see the devastating environmental and social impacts.

At both macro and micro levels of global society, people are taking action against corporations who benefit from this Linear Consumption model of take, make, use and discard. Europe’s Green New Deal includes a Circular Economy Action Plan designed to reduce the use of natural resources, create less waste, and empower average consumers. Europe has also been leading the push for a universal charger to reduce waste among consumer electronics.

A global collective of law experts recently crafted a legal definition of ‘ecocide’ meant to aid lawmakers when prosecuting big corporations for environmental decimation. ‘Ecocide’ is officially defined as “unlawful or wanton acts committed with knowledge that there is a substantial likelihood of severe and widespread or long-term damage to the environment being caused by those acts.” The hope is ‘Ecocide’ will eventually be added to the list of International Criminal Court crimes that can be prosecuted as criminal offenses.

Activists like Martina Postma, who developed Repair Cafés in the late 2000s, and Kyle Wiens, the founder of iFixit, do much to provide the average consumer access to quality and affordable repair parts and information. Suppose you are within a reasonable distance of one of the 1500 global Repair Café locations. In that case, you can bring in your broken electronics and seek advice, tools, and support from a community of tech enthusiasts. If you prefer a remote support option, iFixit.com offers hundreds of thousands of repair manuals, articles, and support forums to help you troubleshoot your device woes; you can also order affordable replacement parts from them.

The Right to Repair movement has gained significant traction in the past few years. Activists in the EU, US, and Australia aligned with the movement have helped spur the introduction and/or passage of legislation to force manufacturers to provide access to repair knowledge and tools. France introduced an anti-waste law in 2020 that has created a repair index for electronics and appliances. Shoppers are now greeted with color-coded labels that define a product’s ease of reparability. France’s environment ministry has called the index system “a tool in the fight against obsolescence- planned or not.”

Don’t get sucked in by the hypnotic power of Big Tech marketing. As an individual consumer, using independent repair services to keep your devices going as long as possible. Start a conversation in your workplace about how your business handles e-waste. Get them to work with ethical e-waste partners that ensure the recovery of the raw materials without the negative impact on our environment. Get a battery recycling box going in your family. If you are not sure of how to recycle e-waste, ask your local council. They will have this information.

But also make sure that your local council is managing e-waste ethically and not just shipping it overseas. Lastly, write to your local politicians urging action around the Right To Repair.

This site uses Akismet to reduce spam. Learn how your comment data is processed.